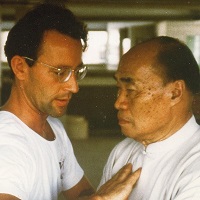 Q. What is your understanding of how, and when, Tai Chi emerged?

There are really two versions of Tai Chi history – a written academic one and another which is passed down from teacher to pupil. My teacher (Master Huang Xingxian) had his history that he had been told by his teacher who had been told by his teacher and so on. I trust that one more because each of these people in the chain trained for a long time, 20 years or more with their teachers. Their teachers passed on their genuine knowledge that they had received from their own teachers. Then there are the written historical records and these are incomplete really, because especially in older times the teacher never gave out the information - this was a type of secret information that was passed on from teacher to pupil... read more below EN DE FR downloadarticle.pdf

In remembrance of Master Huang Xingxian on the occasion of the commemoration of the 100th anniversary of his birth, in response to the lifelong obligation I feel towards him as my teacher to pass on his teaching, I would like to write something of what he personally explained and taught to me some decades ago. Master Huang was both a martial artist and a Daoist. In time he was first a martial artist, then was gradually introduced to Daoism by his main Fujian Baihe (White Crane) teacher, Grand Master Xie Zhongxian, then later led deeper by Grand Master Zheng Manqing. But by the time I came to know Master Huang, inside he was first a Daoist and second a martial artist. Once when sitting outside eating, late at night in Kuala Lumpur, he looked up at the stars then gesturing to the expanse of the night sky he turned to me and said, "That is the big Taiji, inside us is the small Taiji", then after a moment's pause added quietly, "Now I teach Taiji, not Taijiquan"... read more below EN FR downloadarticle.pdf

Master Huang Xingxian accomplished a great work in establishing and evolving his Taiji teaching within South-East Asia and congratulations are due to the Singapore Taiji Society for successfully reaching its 50th anniversary. This success is not independent of the great contributions of Sia Mok-Tai and Samuel Kuah as head instructors over those years during which I have had contact with the Society. Though to manage such a society involves difficulties, these fade into the past and lose their importance in the light of the overall success the Singapore Taiji Society has had in helping the citizens of Singapore through the teaching of the refined and genuine methods of Master Huang's Taijiquan... read more below EN DE ES FR NL downloadarticle.pdf

What have you gained from your years of Taiji work?

Internal evolution is the main result of practise under the direction of a genuine teacher. Effort and sacrifice is the cost. In my early twenties, with 10 years training in Western martial arts, some knowledge of yoga and meditation, and about to complete my university studies, I made the decision to concentrate my life on the search for inner meaning and development. Boxing and wrestling had no depth, Yoga had depth but was too passive, while meditation lacked balance without some complementary training... read more below EN DE ES FR IT NL download IL.pdf

The Death of a Master

(Originally published in the St Benedicts St Taiji-school Magazine and later in the American "Tai Chi" magazine.)
In December 1992 ten thousand Taiji exponents felt the loss of their teacher, Master Huang Xingxiang (Huang Sheng-Shyan). He died in Fuzhou, China, the place of his birth 83 years earlier – having returned there a few months before his death after 43 years spent living and teaching in first Taiwan then later Singapore and Malaysia. He left behind approximately 35 independent schools throughout Malaysia, Singapore, Australia and New Zealand. Each of these schools has professional instructors and many have more than one hundred students. The first of these schools were formed over 30 years ago in Singapore and East Malaysia. I personally established a school in Auckland New Zealand in 1979 after 7 years training under Master Huang and his senior instructors and being accepted as one of his personal pupils in 1978... read more below EN FR downloadarticle.pdf
← taiji